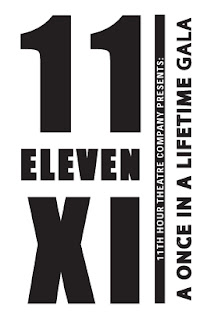 11th Hour Theatre Company is marking the date 11-11-11 with quite the celebration – an 11-hour long celebration to be exact. The company is hosting a family event during the day and then moving to World Café Live in the evening for a USO-themed Happy Hour and a concert featuring some of the best musical theater voices in Philadelphia that will span the history of Broadway and highlight great 11 O’Clock Numbers from well-known and lesser-known Broadway musicals.

11th Hour is splitting a portion of the proceeds of the event to the Make-A-Wish foundation and The Philadelphia Veterans Multi-Service and Education Center, Inc.

Inspired by the Make-A-Wish Foundation’s mission to enrich the human experience for children through hope, strength and joy, the family event will give kids (ages 7-and up) an opportunity to learn about musical theatre (singing, dancing, puppets, etc.) from some of the area’s top professionals, but also about how hope, strength and joy are some of the main ingredients in creating the “magic” of theatre. While the kids are taking part in the workshops, parents are free to observe or mingle and snack on brunch hors devours while buying tickets for the family-friendly raffle. After the workshops have concluded, the kids will have a quick snack time before the event culminates with a mini-musical performance featuring some of 11th Hour’s professional actors alongside the stars of the show…the kids!

Then, later on in the day, the company will move the festivities to World Café Live. The USO themed Happy Hour begins at 5:30pm and features drinks, hors devours, and the music that brought the country together during the 40s. The Lovely Ladies of 11th Hour (Laura Catlaw, Rachel Camp, Kat Berelli and Liz Filios) will be performing, and noted Philadelphia actor, Jeffrey Coon will be making a special appearance. At 8 p.m. the stage will shift, and the lights will go up on an epic concert for 11th Hour.

MISSED A DEAL? Check Out The Latest Related Posts

This site uses Akismet to reduce spam. Learn how your comment data is processed.

Win It!
Family 4-Pack to Peppa Pig Live! at the Met Philly

Copyright &copy; 2011 All Rights Reserved
Designed and Developed by SocialHubris